I designed this for testing and building microservices. This Alpine Docker image is packed full of tools for interacting with containers, service meshes, Kafka, and other application development needs. Being that I’m a .NET developer this is geared towards tools that align with that however, pull requests are welcomed!

WARNING: This is a work in progress. I’ll be adding and expanding this image and this blog post.

So, there are several reasons to use this. For one, being that this is a Docker image it’s portable and can be taken anywhere. I built this because we can’t use WSL 2 at work because there are Cisco VPN issues that cause WSL 2 to not have Internet when connected. I was stuck in PowerShell following Kubernetes tutorials online that used Bash… Without having support for Docker in WSL 1 I was forced to use PowerShell. Which eventually became frustrating!

There are several ways this can be ran. Be sure to look at the configuration

Assuming you have Kubernetes contexts configured locally, minikube, and Docker installed this is a good way of interacting with your host machine. This script binds to the host and mounts the Docker socket to the container.

I’ve packed this image full of tools for development and managing a Kubernetes cluster.

Currently, I don’t have any documentation but I will create docs and scripts that are useful. 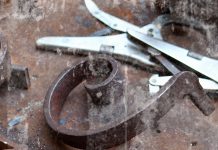